Crime of the Week

Okay, citizens of West Virginia, this is your opportunity to step up and join in the fight against crime.

If you have any information about these crimes or any crime, you are urged to call Crime Stoppers of West Virginia at 304-255-STOP (255-7867) or submit a Web Tip.  You do not have to give your name.  You will be assigned a code number whether you call or submit a web-tip and that code number becomes your name to Crime Stoppers.

OR, IF YOU PREFER, YOU MAY CONTACT THE  INDICATED LAW ENFORCEMENT AGENCY INVESTIGATING THE CRIME DIRECTLY.

The Beckley Police Department is still seeking information in the Hit-and-Run Traffic Fatality of twenty-three year old CLINT VERNIEU (pictured) who was struck by a vehicle near Calacino's Pizza on the evening of September 30, 2019. The vehicle then fled the scene. 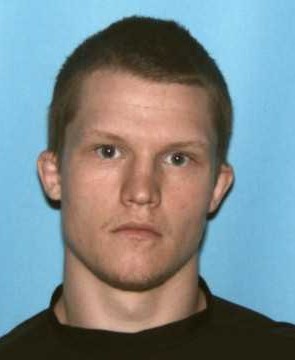 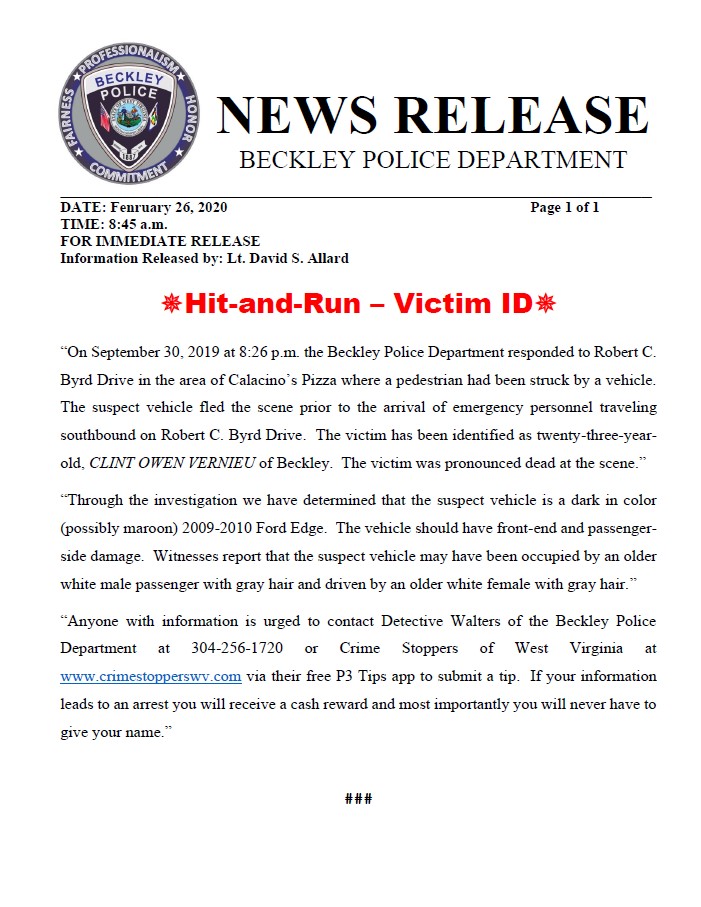 BACKING UP IN TIME:  On October 1, 2007, Beckley Police responded to a Breaking & Entering at National TV & Appliance at 1412 N. Eisenhower Drive.  The suspect(s) had disabled the alarm system prior to breaking into the business.  Suspect(s) stole twenty-two (22) flat screen televisions, several furniture items and the safe.  A tractor trailer type vehicle was seen parked at the business during the time of this theft.  The safe was recovered along with several other safes from various business break-ins in the area around the same time frame.  The safes were located in the woods behind the YMCA Paul Cline Memorial Youth Soccer Complex.  Anyone with information on this crime is urged to contact Crime Stoppers or the investigating officer, Detective Sergeant D. S. Allard with the Beckley Police Department.

On March 5, 2009, a white male and white female broke into the St. Francis de Sales School on S. Oakwood Avenue in Beckley.  The two individuals broke into the principal`s office and stole several hundred dollars in cash.   It is believed that the individuals responsible lived close to the school at the time - possibly on Burgess Street. On January 18, 2013, at approximately 9:50 PM the J & S Pawn Shop at 311 N. Eisenhower Drive in Beckley was broken into.   The suspect stole several electronic items and a paintball gun.  The suspect wore very distinct clothing.  Images of the suspect were captured on video surveillance. There has been a string of burglaries since December in Glen Morgan, Shady Spring, Beaver and Ghent.   Similarities signal they may be the work of one person or a group of individuals.  Various items have been stolen, however the focus seems to be on jewelry, cash, firearms and prescription drugs.

NOTE:   From the comfort and safety of your home, you can provide information to Crime Stoppers that will lead to the arrest of the subjects responsible for these burglaries.   Your identity will never be known and you, the Tipster, without taking any risks or leaving the comfort of your home, will receive as much reward money for your tip as the thief or thieves committing these crimes make in a day`s or night`s work while risking capture and prison time.   All you, the Tipster, has to do is dial a telephone number or type in a web site address.   Now that`s smart, fast and easy cash!!!

In the morning hours of January 29, 2013, two male subjects gained entry to a Prudence Road residence by breaking out a window.  They found the homeowner in his bed at the other end of the residence and beat him with a portable heater while demanding his prescription medication.   The victim did not comply with their demands.   The subjects did find and take a controlled subsance, however, they did not find the victim`s most recently obtained medications.    Due to the seriousness of the injuries sustained by the victim, he could not give detailed description of the subjects at the time of the incident, but did state that they were wearing masks and one was wearing a camouflage jacket.

The Beckley Police Department isinvestigating the breaking and entering of Schewels Furniture at 200 Beckley Plaza.   The store was broken into and merchandie stolen during the night of January 23rd or early morning hours of January 24th. 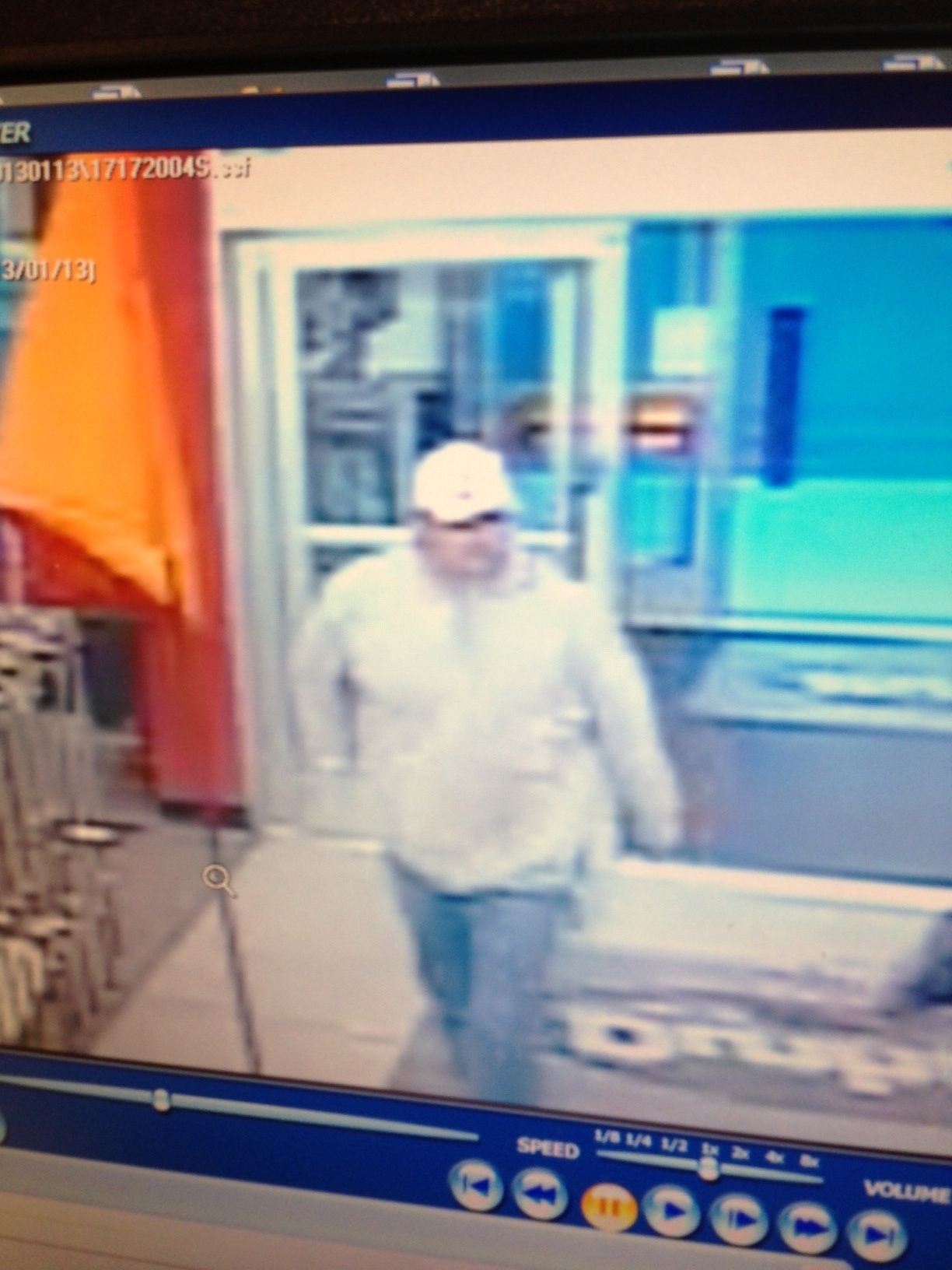 On January 13, 2013, at approximately 5:15 PM, a male subject entered Dunham`s in Beckley and walked out with crossbows exceeding a value of $1,000.00.    The suspect appeared to be a white male, approximately 6` tall, weighing approximately 200 lbs., wearing a gray hooded sweatshirt, blue jeans and a white cap.     The suspect got into a full size Dodge pick-up truck with an extended cab. 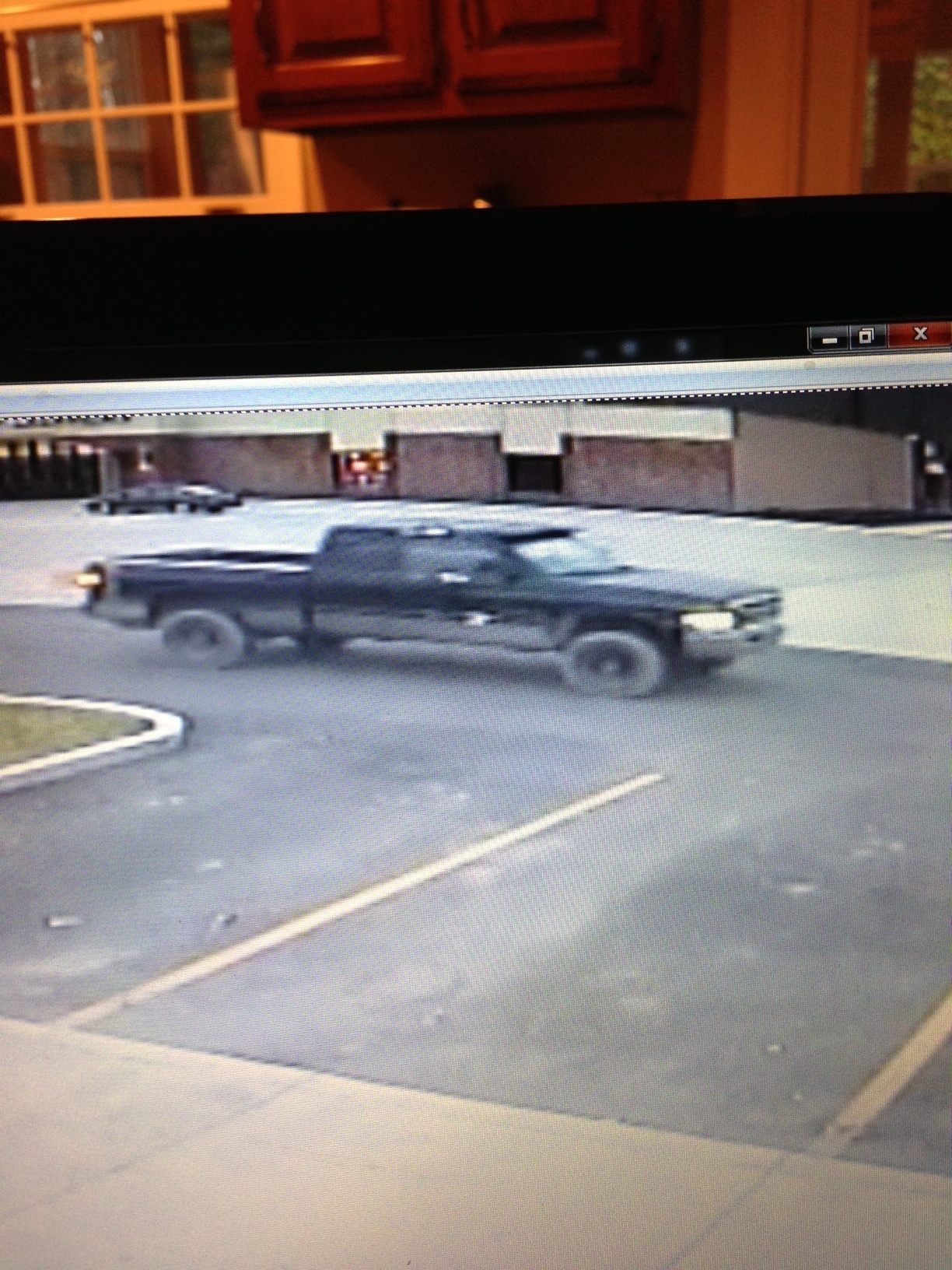 The Raleigh County Sheriffs Office is investigating the break-in of several storage units of Riviera Mini Stgorage located at 120 Hankwoods Drive in Beckley.     The break-ins occurred during the night of Janauary 3rd or early morning hours of January 4th.

The Raleigh County Sheriff`s Office is investigating an armed robbery that occurred at the `HOT SPOT` on South Fayette Street on November 26th at approximately 2:00 AM.     Two males wearing masks entered the busines, brandished a handgun and demanded money from the clerk.

The Beckley Police Department is investigating the theft of a purse from a medical office at 250 Stanaford Road on September 20th at approximately 1:00 PM.    Later that day the White female in the gray T-shirt and blue jeans with dark hair pulled back in the picture below on security surveillance camera attempted to use a credit card belonging to the victim.    The female may be the one who stole the purse.

The vehicle pulling away from the pump in the background is the suspect`s vehicle.  (Click on pic of vehicles to enlarge) 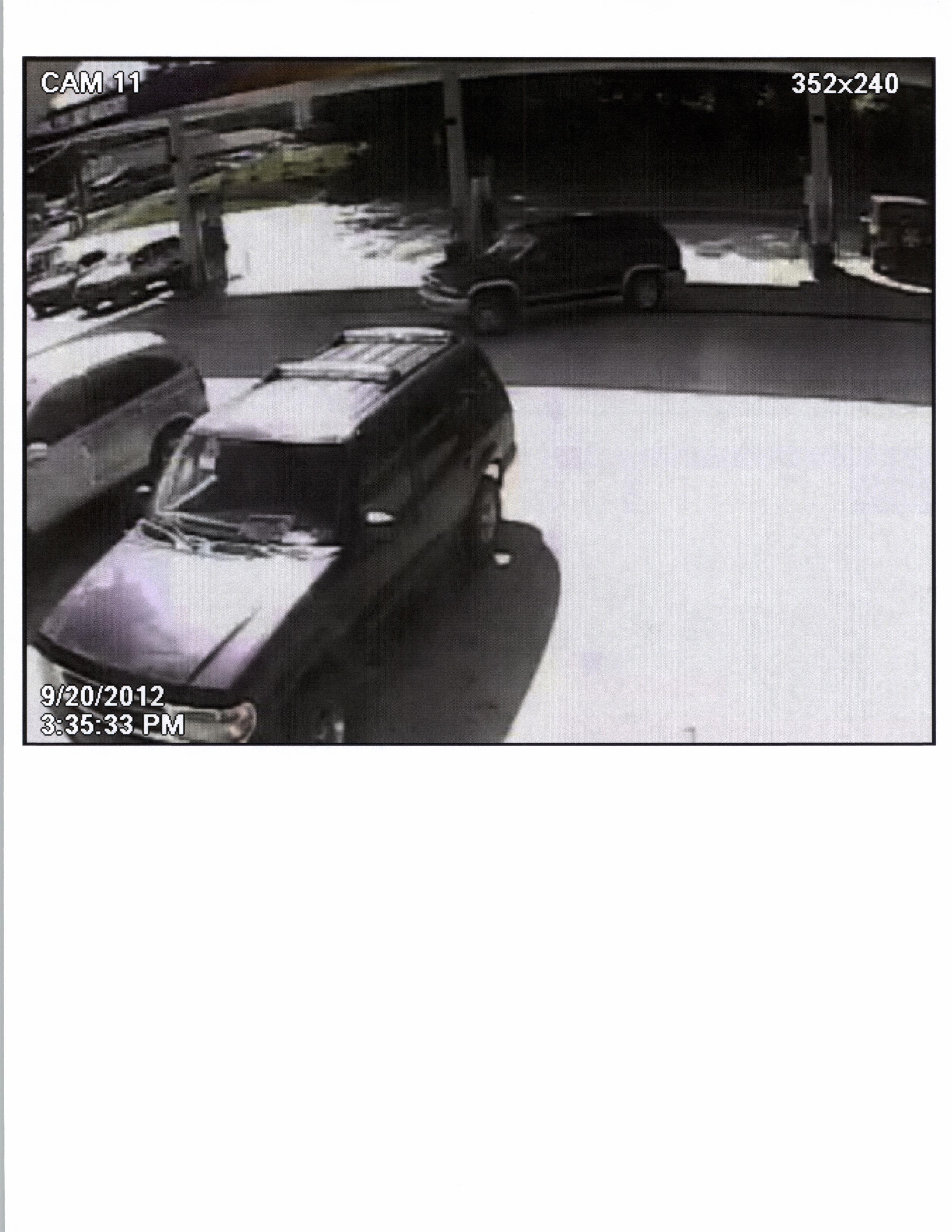 The Raleigh County Sheriff`s Office is investigating a Breaking & Entering that occurred at Godfather`s Liquor in Bradley on October 22nd at approximately 11:40 PM.   Two individuals wearing masks forced entry into the store after the business was closed and stole merchandise from the store.      Surveillance pictures below:

Just before 2:00 AM on Thursday, October 11th a 70 year old female was awakened by the burglar alarm at her residence in the Dothan area.   Arming herself wih a gun, she approached the rear door of her residence at which time she was startled by a suspect who punched her in the face.   The victim shot at the suspect who turned and fled from the residence.   The burglar had cut through a screen and broken a window in the rear door to gain entrance.

CASE SOLVED - ARRESTS MADE    On September 26, 2012, at approximately 10:49 PM the Beckley Police Department responded to 100 6th Street reference to a shooting that had just occurred.   Upon arrival officers located the victim  SHAWN RUCKER a 32 year old Black male laying n the front yard of the residence with multiple gunshot wounds.   The victim was transported to Raleigh General Hospital where he was pronounced dead.   Seveeral Black males wearing dark clothing and  hooded sweatshirts were observed in the area just prior to the shooting.

The Raleigh County Sheriff`s Office is investigating a robbery at the Family Dollar at 121 Commerce Court in Glen Daniel on Saturday, September 1st at approximately 8:50 PM.   The robber is described as a male, approximately 5`2" with light colored eyes, wearing a red hoodie and a mask and brandishing a crowbar.   The robber left on foot, but is believed to have fled on an ATV which was hidden in the area.

The West Virginia State Police are investigating the theft of a red 2012 BMW X5  from the garage of a residence on Flat Top Road in Ghent betwen July 5th and July 10th.    The BMW was recovered in the Crab Orchard area where the perpetrator(s) had abandoned and burned the vehicle.

ROBBERY OF LITTLE GENERAL IN BRADLEY on August 18th
August 23, 2012

On Saturday, August 18th at approximately 10:00 PM, a male wearing a black and white flannel hoodie and a pink cloth over his face robbed the Little General in Bradley (across from the CrossRoads Mall).   The male put his hand in  his pocket as if he was armed and demanded money.  The clerk gave the male money and the male then left the area in a white car with a spoiler on the trunk lid.

The Raleigh County Sheriff`s Office is investigating an armed robbery that occurred at the Glen Daniel Dollar General on August 12th at approximately 9:55 PM.   The offender is described as a male wearing a dark colored mask, gray hoodie and dark colored pants.   He brandished a crowbar type weapon and demanded money - the clerks complied.   During the robbery the offender did shove a female customer, causing her to fall to the ground.

The Sophia Police Department is investigating the theft of a flat screen television and a Blue Ray player from the Sophia Freewill Baptist Church on Wickline Avenue in Sophia.  The theft occurred during the early morning hours of June 12th.